http://ukrainewarlog.blogspot.co.uk/p/british-citixen-and-kremlin-reporter.html
Posted by Robbie at 05:25 No comments:

I have created this blog as an attempt to catalogue the illegal and questionable activities of blogger Graham William Phillips in Ukraine. Graham claims to be an independent journalist posting the truth. This statement is further from the truth than can be! Graham works for Russian media controlled by the Kremlin. This is even confirmed by the Russian Embassy in the UK 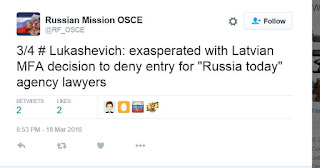 The reports he posts are completely one sided fabrications of the truth and are meant to incite hatred against the Ukraine. If you have read or seen any of his work after the first sentence the lie has almost certainly taken place which he will then build upon to reel you in. His reports contain little fact and are mostly unsubstantiated lies. He publishes these to promote maximum hatred towards Ukrainians and their supporters. If you challenge him he will simply try to discredit you either based on lies or will simply undermine you on an editorial incorrect point.


You will find that Graham will always blame Ukraine in EVERY story he prints but will never provide a shred of evidence to back it up. He also claims to be independent and unbiased but has NEVER once published any story on damage or deaths of civilians/civilian infrastructure attributed to the Russian side

A sample of Graham's "work"